Transitional Gray Kitchen Makes for a Unique and Inviting Space

For Jennifer and her husband, there’s no better evening than a comfortable dinner party with close friends. They love it so much it’s become part of the rhythm of their household.

“I entertain all the time,” Jennifer told me. “We have people over at least once a week.”

With three young daughters and guests arriving regularly, they wanted to make their kitchen space more conducive for community and family. The kitchen didn’t need a complete overhaul, but they felt like they could improve it both functionally as well as stylistically.

The initial plan was to replace their raised, split countertop. The two-tiered countertop provided limited working space and was hard for their young daughter to access. However, they worried that they might regret installing new quartz countertops on top of their old cabinetry. The maple cabinets had been re-painted white years back, but there was nothing they could do about the outdated arched door style.

Ultimately, the two decided to replace both their countertops and their cabinets, all at once.

Functionality in a Transitional Gray Kitchen

They were referred to CliqStudios kitchen designer Kevin Kuerbs by Jennifer’s sister-in-law. Kevin called Jennifer on the phone and the two connected immediately.

“I’m a type A personality, and Kevin was really responsive at answering my questions. He’s quick, responds right away, available, and I knew I would always get a response and an answer.”

Kevin sent over several samples of different cabinet colors, one of which became the clear favorite. “She loved the Dayton door in Urban Stone – absolutely adored it,” Kevin said.

Jennifer’s husband installed the cabinetry. He isn’t a contractor, Jennifer explained, but is “someone who can figure stuff out on his own.” They completed the project by themselves, working during the weekends. “It probably took five weeks,” she said. “It really was not that hard. Nothing came damaged; whoever shipped them to Wisconsin did a good job.”

Tweaking the layout to optimize the kitchen’s functionality as well as beauty, Kevin suggested moving the microwave from its spot above the range to a built-in microwave shelf under the counter. “Moving the microwave was actually really nice,” Jennifer said. “I have little girls who can use the microwave. Before, they couldn’t reach it.”

For the now-vacant spot above the range, Kevin proposed a wood range hood in the same Shaker style as the cabinets.

The new hood drastically improves airflow and ventilation. “We love the hood,” said Jennifer. “It just looks classic and finished and adds a nice showcase to the kitchen.”

“I wanted something a little bit different.”

White was used in the subway backsplash and quartz countertops, but for the cabinetry, Jennifer used a light-gray finish, the Urban Stone. The remodeled transitional gray kitchen makes for a distinctive look.

“I like white; I think it looks great, but I wanted something a little bit different,” she explained. “Urban Stone is the perfect color because it’s not white – so it doesn’t look like everyone else’s kitchen – but it’s also very neutral. You can use any color palette when you’re serving or entertaining people. If it’s Christmas, you can do greens and reds. On Valentine’s Day, hot pinks. I have three little girls, so if they want to have a party, I feel like anything can go with the ‘neutralness’ of it.”

As if to prove the point, they decided to invest in the “monochromatic, calming look,” and painted their walls to match the color of their cabinets.

“Urban Stone is neutral enough where it’s not white but can be paired with pretty much any color or finish as white,” said Kevin. “It’s a taupe. Like, white’s hipper cousin.”

Raising cabinets to the top of their 11-foot ceiling eliminated a lot of dead space, making the kitchen seem larger. The couple installed an undermount farmhouse sink for its classic styling and ideal functionality. They used aged brass across the faucets, cabinet pulls, and lighting fixtures to help soften and add a sense of luxury.

“This is more of a transitional gray kitchen,’” said Kevin. “The color is more traditional, but the door style is more modern. It’s nice, neutral, and has a blend of everything.”

Ellen Pace
I love everything about this kitchen. The subtle color combinations have a really nice feel. Classy, without being overstated.
Reply

Devon Girard
Looking for these exact cabinet pulls! I see the link for the hardware used, but which website was it under and which finish? A link to the product would be great! Thank you!
Reply

Leah
What is the paint color referring to? Is this the color of the cabinets? If so, is this the standard color or did they have them painted?
Reply

CliqStudios Social Media
The paint Urban Stone is the color of the cabinetry. This is a paint finish that we offer for our Signature cabinets.
Reply

Angela Barnes
Love the monochromatic look of the room! Could you please tell me what color you used on the walls?
Reply

CliqStudios Social Media
Thanks for your question! We unfortunately don't know the wall color because it was sourced locally by the homeowner.
Reply 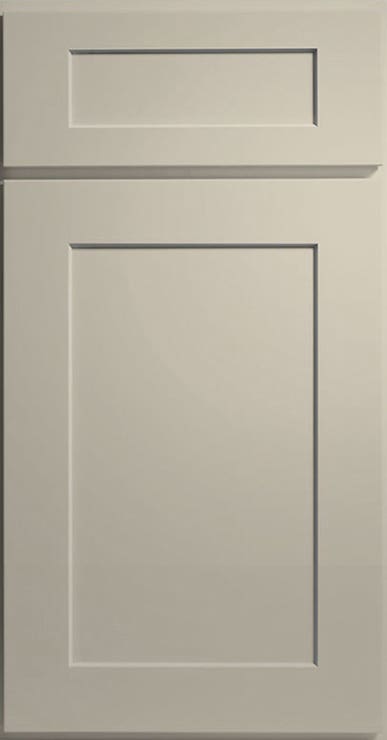