Sleek and Sophisticated One Room Challenge

Opening Up a Dated and Tiny Kitchen

Mary knew there were two glaring problems with her new house: it was dated and tiny. Built in 1901, the Utah home stood at a meager 850 square feet. “I knew when I bought it that I was going to knock out the wall between the living room and the kitchen,” said Mary. With tearing down the wall came the urge to remodel. Mary was in luck. She knew the right people to make her dream of a sleek and sophisticated kitchen happen.

The House that Lars Built & The One Room Challenge

Mary is the business director and partner for The House That Lars Built, a design and style blog created by Brittany Watson Jepson. To top it all off, Mary’s kitchen was to be featured in The One Room Challenge. The One Room Challenge is a six-week event where design bloggers chronicle transforming a room. Quickly, Mary and the team got to work and that’s when they reached out to CliqStudios.

To create Mary’s dream look, she turned to CliqStudios for cabinetry. She and her CliqStudios kitchen designer Kevin Kuerbs right away the two hit it off.

“I loved Kevin so much! Sometimes when I feel stressed, I’m like ‘I should just call Kevin!’ He was so proactive and gave me many options,” Mary recalled. “He knew what would work and where and gave me different renderings of the kitchen so I could visualize everything. His skill set is amazing but his responsiveness shot him to the top for me.”

Her designer Kevin felt the same, “We hit it off right away. She was very willing to listen to new ideas.”

Together they found the best way to refresh the space. “We really didn’t change the layout. She did open up the space between the kitchen and the living room. She had a very dated kitchen and she wanted to brighten it up and give it a new look,” said Kevin.

From the ‘90s style oak cabinets to the florescent lighting, Mary’s kitchen needed a refresh. “There was an aesthetic goal and a functional goal. My personal style is sleek, clean lines and contemporary. I wanted that feel to come through,” said Mary.

Mary and designer Kevin reviewed her cabinetry style and color options, determining the best fit for her style and space. “I was considering the black finish, Carbon with a butcher block countertop, but we went with white because we were looking for that feeling of openness. Everything is white except for the black appliances and green couch. That was in line with the aesthetic and idea of keeping things open. I wanted a monochromatic feel,” said Mary.

“White completes the look. The windows pop more. I love how she chose white because it creates a nice neutral,” said Kevin.

Next they maximized Mary’s cabinet storage space. Storage in the existing kitchen was scarce. There was a useless pantry taking up space. Mary continued, “Taking the cabinets up to the ceiling and choosing Cloud White added what I wanted: sleek, contemporary lines. It makes the room feel bigger.”

Because they only had six weeks to transform the space, they needed to order and install the cabinets quickly. As soon as the cabinets arrived, Mary looked them over and then her team got to work installing them.

“My installer was like ‘Wow! These are high quality materials.’ With some affordable cabinets it’s a trade off, but not with CliqStudios,” said Mary.

A Sleek and Sophisticated Style

Kevin was elated by her decisions and guided her throughout. “With a kitchen it can be hard to have a unique style and she totally made it her own,” said Kevin.

He went on to talk about how Mary’s kitchen defies traditional style labels. “The style of her kitchen is funky, clean and eclectic. It molded together several styles: mid-century modern, industrial and farmhouse. You can’t really put a label on this kitchen because it’s so unique,” said Kevin.

The result is the sleek and sophisticated kitchen Mary wanted. “It’s a night and day difference. The old kitchen with the hardwood floors and dark cabinets was monochromatic, but in a bad way. It was heavy and old feeling,” said Mary.

After six weeks of hard work, it was time for the big reveal. Mary got exactly what she wanted; an elegant space made bigger by her all white cabinetry design.

“What I wanted in a home was to feel like I was going to a lovely hotel. I wanted a space that is very restful with that contemporary and curated look. That’s what it has now,” said Mary.

“It turned out really cool. It’s modern and it’s fresh. It’s not like what everyone else has, especially with the black framed windows, layout, and chairs. She made the space more unique to herself,” said Kevin.

Now Mary’s kitchen is the perfect place not only to cook, but for socializing “The kitchen is where I hang out now! It’s just so peaceful and it’s a place I want to be. It’s a more usable space and everyone who comes over wants to be in there,” said Mary.

She continues, “I love your team and your product. Everyone who comes over I’m sending to CliqStudios.”

Denise B Mellor
The underside of the cabinets are not white....I think that's odd. I really looked at this kitchen because the layout is exactly the same as the kitchen we need to remodel in a Townhome we just purchased in FL. I like the look....will continue exploring and save your site.
Reply

Dan Jones
That is true. Most cabinet manufacturers do not "finish" the tops and bottoms of cabinets. You can see this at and Kitchen Dealer or Big Box store. Based on the design most kitchen cabinets can be finished with a veneer panel and light rail molding.
Reply

Joanne
Absolutely love your kitchen what kind of countertops do you have and what is the color it’s beautiful,
Reply

Cindy
I too would like to know more about the lovely counter and backsplash - material, color name, sq.ft. cost!
Reply

Mary Garofalo
It's beautiful! Where did you get your cabinet hardware and light fixture over the sink?
Reply

CliqStudios Social Media
The light fixture over the sink is the Lola from Mitzi. The hardware is from Emtek.
Reply 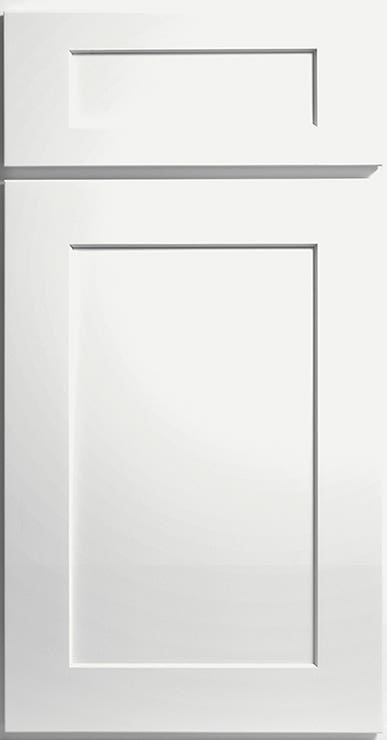