Massive Island for the Love of Entertaining

Remodel Spurred by a Dishwasher Flood

It was Thanksgiving when the dishwasher broke and then flooded the kitchen. But Washington homeowner Brenda R. didn’t panic.

Instead, she and her husband started filing insurance claims and seeking help for repairs when a thought came to them: instead of just fixing the minor items, why don’t we go for the big remodel?

Interested but wary, they began asking questions. How would it look? What was the process like? How much would it cost? After exploring their options, they decided to go ahead and renovate their kitchen.

Mediocre in design, the existing kitchen left much to be desired. Especially related to the cabinet and kitchen island layout.

In proportion to the rest of the space, the island was strangely small. It was known in the house as “the boomerang” due to its odd, angular shape, which left a large empty space smack dab in the middle of the room. Moreover, there was insufficient clearance between the island and the wall oven.

“If you’d try to pop something out of the oven, you’d always be saying ‘excuse me,’ to try to get people to move,” Brenda explained.

Aside from the island, the cabinetry layout also needed work. Along her sink run, the builder-grade cabinetry ended abruptly in the middle of the wall, leaving almost two feet of empty space. Trying to make use of the space, they wedged their wine cooler at the end of the row, but it didn’t look extremely elegant.

“It was so awkward,” Brenda said. “It was just, bizarre.”

“I host a couple of different parties throughout the year,” said Brenda. “I tend to cook a lot and bake a lot. We always have a lot of people over – even on a spontaneous basis.”

Their goal was to create a space with superb functionality for their love of entertaining. To help overhaul the kitchen, they hired David and Valerie Minor of the remodeling firm Community Builders.

David saw that the kitchen island could be greatly expanded while still allowing plenty of room for traffic flow.

“The kitchen wasn’t matched to the house. It didn’t fit at all,” said Minor. “For me, proportions are really big, so we gave her a huge work surface for the island. When you walk in – it’s stunning. Your immediate reaction is, ‘wow, that is one massive island.’ And yet, it doesn’t look out of place.”

“We probably changed the island six different times just to get it exactly how she wanted to use the space,” McKenzie said. “She wanted a lot of storage around the island. That’s why we have usable cabinets on both ends, and on the backside.”

As a dedicated baking zone, the island stores the food processor, blenders, KitchenAid, and all the related utensils.

“I can pop them right on the counter with the outlet right there – I’m ready to go,” said Brenda. “Everything is in close proximity and the way that the cabinets and drawers are set up makes it so easy.”

The rest of the kitchen’s usable storage was maximized with the help of dedicated nooks and little details. A kitchen buffet near the dining table allows for serving space as well as storage for less frequently used items. A separate bar area with a glass doors and a bar fridge was installed just outside the main kitchen area.

For accessible storage, drawers were incorporated on as many base cabinets as possible. Tray dividers were incorporated above the wall oven and refrigerator for cookie sheets and serving platters. Brenda, Kelly, and David worked on multiple revisions to ensure that every item in the kitchen has its proper place.

But she knew that she wanted to add another color. That color was navy.

“Navy is to me that new neutral color,” she said. “It’s kind of that classic. It doesn’t scream ‘I’m blue’ at you – when you’re in the home, it just flows really really well.”

The two-tone kitchen adds a splash of elegance and intrigue without sacrificing the bright cleanness of a white kitchen.

Cabinets for a Hard-Lived Household

With two 100+ pound Bernese mountain dogs running about in the house, it was very important to Brenda that the items she brought into her kitchen were built to last.

“We are a hard-lived house,” she said. “We need to have things that are hard-lived.”

The things she loves the most about the kitchen are the cabinets. “The soft-close uppers and lowers are absolutely phenomenal.”

For that, she thanks her contractor, without whom she would not have discovered CliqStudios. Compared to the local cabinet manufacturers she had considered, CliqStudios provided a higher quality product at a lower cost.

For David Minor, it was ease and helpfulness of a dedicated designer that he appreciates the most.

“We’ve worked with designers from a lot of different companies,” he said. “Some have great design sense, while some are just selecting boxes and putting them into place. Kelly was very responsive, very knowledgeable, and had a great design sense.”

From the design, to the delivery, to the product quality and customer service, “everything in my eyes has been very, very pleasant,” said Minor. “Easy to work with and very professional.”

For first-time remodelers, Brenda recommends that seek a reputable contractor .

“They’ll tell you when you need to pick out things and what your timelines are – that’s really important,” she said.

Trust your gut, she added.

“Go in with a vision, know your vision and stick to your vision. And try not to have a bunch of change orders.”

In the mornings, Brenda comes downstairs to her kitchen and feels a rush of excitement. Although it’s summertime, her mind turns to Christmas. She looks forward to the hosting the holiday party, standing around the island with friends and family, exchanging cookies.

Katie
Which crown molding is used on the top of these cabinets?
Reply

Christina cloutier
What were the costs of these cabinets? Thanks!
Reply

Jackie
I love this look! Everything about this kitchen is perfect. The blue island is so awesome. Is it a Sherwin Williams color?
Reply

CliqStudios Digital Marketing
Thank you! The island color is our painted finish Navy, however Sherwin Williams is a great source for color matching.
Reply

Julie S.
I am starting a remodel and having this much island seating would eliminate the need for a permanent full size dining table, which I LOVE! It will also allow me to create the clutter resistant space I desperately want. What are the actual dimensions of the island?
Reply

CliqStudios Social Media
The dimensions of the cabinetry used for the island was 84" x 60".The island has at least 12-15" overhang for the countertops along the back and on one side.
Reply

Phil Linebarrier
is it possible to find out where they got the chairs with the pattern fabric? We are doing a similar project with navy cabinets on our island from CliqStudios and looking for chairs/bar stools.
Reply

CliqStudios Social Media
The chairs were purchased from Pier 1 by the homeowner.
Reply

Linda
Linda, I am starting to look for my remodeling I have 3 rooms kitchen dinning & den that I want one big open space. I love the blue island which is what I am going to use. Looking to make 2 islands I have 8 grandkids and total of 17 people . Host all summer long and always entertaining.
what size island would be good if I did 2 instead of one big one. Any suggestions
Reply

CliqStudios Social Media
Thanks for your question! Our design team would be happy to discuss different options to fit the needs of your space. Call 888-350-1242 to speak directly to our team.
Reply

Alex Valdes
Love the colors and layout. And love big islands. Just wondering what's a good island size (wide and long). This island looks approx 5' wide which I think is too much as having people on both sides, they'd be "very far apart". Not Sure if 4' (overhang included) or what's a good size to have a large island but still "cozy".
Reply

Erin
Beautiful kitchen! How did you incorporate electrical outlets into your island? I am struggling to figure that out with my island design.
Reply

CliqStudios Social Media
Hi Erin! You will want to consult with your electrician to determine if you have incorporate an outlet into your island.
Reply

Charlotte Emery
Today's kitchen is certainly the meeting place and a gathering center for family and friends. Brenda, the designers and the carpenters did an awesome job. I love the open concept look because it is warm and inviting. It says, come on in and join us.
Reply

Karin MacLellan
I love the floors too! What floors and color? Thanks!
Reply

CliqStudios Marketing
Hi Karin. The homeowner selected and sourced those floors locally, so we don't have the details. They are beautiful though.
Reply

Colleen Foote
I am thinking about a big island -what is the surface? does it have a seam?
Reply

David Minor
The surface is Quartz and there is one seam which our amazing fabricators did a wonderful job hiding. The veining even runs through the seam almost perfectly making it almost invisible.
Reply

Paula
Love this look! I am doing similar in my remodel and wanted to know if you could tell me the paint color that was used on the walls. I thought of using teal on my island but now rethinking that because the navy is so classic. Beautiful!!
Reply

Natasha Cunningham
I think this remodel looks Amazing. That navy blue is the perfect color to make the flooring and stainless appliances!
Reply
Load more comments
Back to Gallery 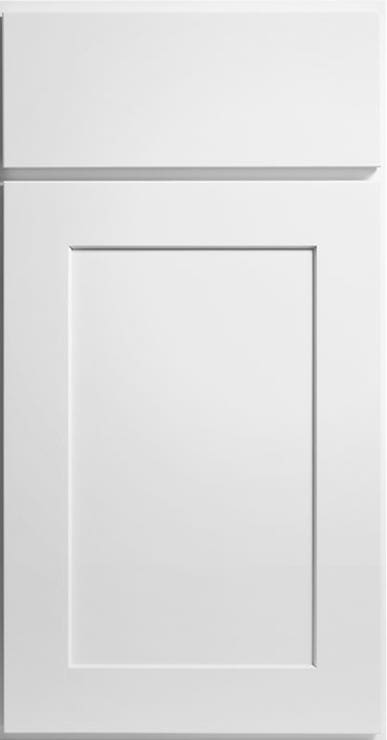